Sometimes you discover a special little corner of Durham when you least expect it. Local mom and author Melissa Rooney was lucky enough to experience this at Halgo European Deli and Grocery in SoDu and shares it with us here.

I have driven to Durham’s South Regional library for seven years now, each time passing the cute little house across the street advertising Polish Kielbasa and Pierogis and thinking “I should really check that place out.”  After a months-long hiatus, I visited the library this week and, upon exiting, stared once again at the familiar house and signs. I’d nearly turned left onto South Alston Avenue when I made the split decision that today was the day and drove straight across the street into the tiny parking lot in front of the now sprightly green house. As I opened the door to the Halgo European Deli and Grocery and entered the store, I couldn’t escape the feeling that I’d been transported to a little store in Poland or Polish New Jersey, at least. 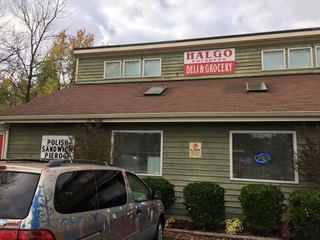 I’d expected a deli counter with funky sandwiches, meats and cheese for sale, but I did not expect the immense stock of edible goods that clearly came from Poland. “I have to bring my mother here,” I announced to no one in particular; then, catching the eye of the woman behind the counter, I explained, “She’s 100% Polish.”

The sandwich menu was sparse, but the smells emanating from the room behind the register took me back to the times I visited my grandparents in New Jersey when I was a child. I ordered the Traditional sandwich and looked around as I waited. 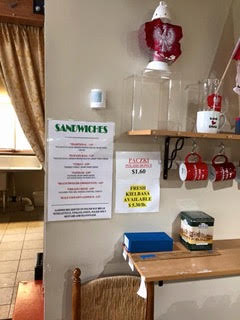 There were rows and rows of European chocolates and cookies, only a few of which I recognized, all bearing Polish business names and addresses. 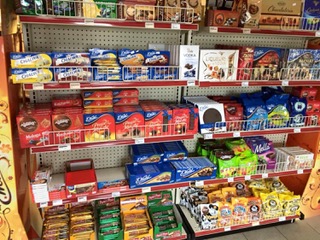 On one shelf nearer the cash register were bags of what appeared to be Polish cheese puffs. 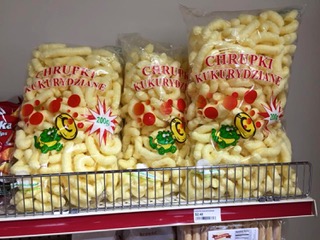 “I know where I’m getting my uncle’s Christmas present,” I said aloud, when I saw the Polish baseball caps and other paraphernalia by the door. The woman behind the counter appeared to pay no attention to me - typical Polish. 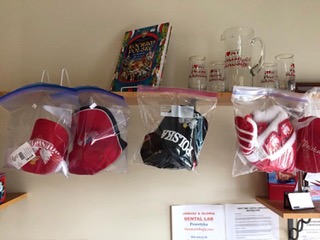 Near the baseball caps was an area reserved for Community advertisements, such as Polish-English language lessons and Polish Mass times. 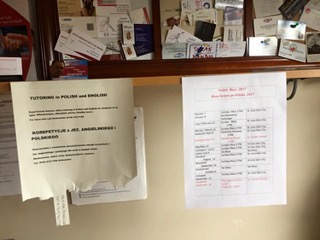 As I was paying for my lunch, I saw several plastic containers of sugar-powdered pastry strips that looked somewhat like Mexican churros; but I knew their consistency was more like thin pie crust. “I had these at my grandmother’s house at Thanksgiving and Christmas growing up,” I said, enjoying that magical sense of destiny we all get from time to time. “I haven’t had one of these in 30 years.” I put an $8.50 box of faworki on the counter beside my sandwich. 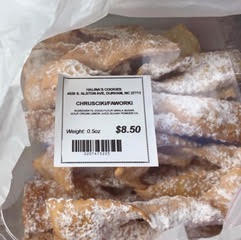 “Seventeen thirty-one,” said the matron, who had the same height and stature, and apparently the same no-nonsense demeanor, as my grandmother.
I paid her, took my bag, and turned toward the door. “I made those,” said the matron in a gruff, clipped voice. I looked down at the plastic box in my arms. It read: Halina’s Cookies
4520 South Alston Ave., Durham, NC 27713.
I thought about my grandparents, making their way from the Baltic Coast to America around the time of the Second World War. They could have started a shop just like this one (my grandfather was a butcher).
As for my sandwich, the meat and cheese were thinly sliced and piled high on the kind of bread that’s only made north of the Mason Dixon line. There was a big slice of dill pickle to wash down each bite and a tiny hand-made pastry (which I later discovered was made on site by the matron) to finish things up. Next time, I’ll ask for more of that lovely Polish mustard and save half the sandwich for later (and I’ll buy some kielbasa). 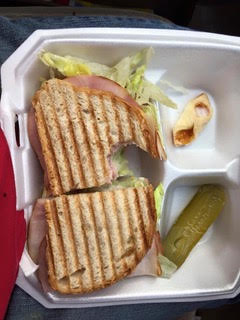 It’s not every day you see an American store devoted solely to a small, relatively unknown country like Poland. Halgo European (i.e., Polish) Deli and Grocery has good food and a wonderfully cultural atmosphere; what’s more, half the shop is empty (at least for now), which, along with the unique and delectable goodies on the shelves, makes it easier to wait with your kids for your order. Halgo is the quintessential learning experience when it comes to immigration and social studies, but please be sure to wait with your kids outside if they are being physical or disruptive (there is a small grassy area with picnic table). I’m certain Halina will be pleased to serve new appreciative and well-behaved visitors, but I’m betting she won’t show it ;-)

Posted by The Stir Crazy Moms at 8:24 AM 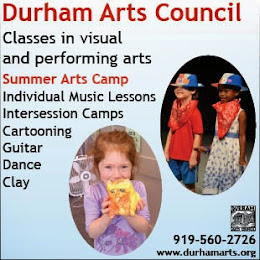 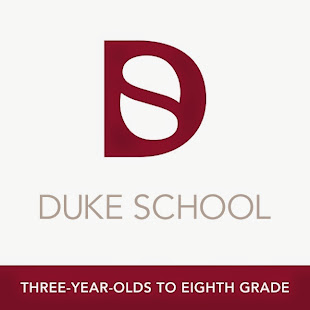